Leeds United are considering offers for Raphinha from Arsenal and Chelsea, both of which have been made in the last few hours, according to a report from Marca.

The race to land the Brazilian’s signature continues. Up until the last week, it appeared that Barcelona were on pole position. Marca reports that the winger wants to join the Catalan giants.

However, the Gunners made the first play for the 25-year-old. Reports this week claimed that Arsenal had seen a bid worth less than £40 million rejected for Raphinha. And they were expected to make a fresh offer.

Leeds meanwhile, want £65 million for the winger, according to the Daily Mail.

It would appear that that offer has now come in. Marca reports that both Arsenal and Chelsea have made proposals for Raphinha in the last few hours. And Leeds are considering those bids. 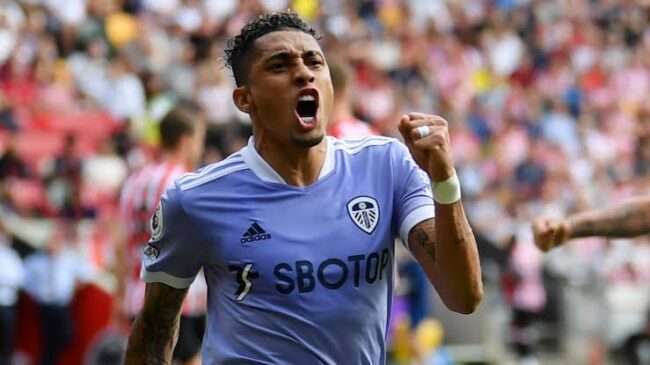 Both Arsenal and Chelsea are ready to put much more financially lucrative terms on the table for Raphinha than Barcelona. However, he is prepared to wait until the last minute to make a decision in the hope Xavi’s men come in.

It certainly does feel, from the outside, as though the race for Raphinha may now be reaching the home straight. Offers are now coming in.

And it does Leeds few favours to hold onto Raphinha for much longer if they are resigned to losing him. They will need to replace him. And they will want the funds to be able to do so.

Raphinha is an ‘amazing‘ player. And anyone who comes in in the wake of his departure will be under significant pressure. So giving them the most time to settle in seems imperative.

Of course, much will depend on whether Arsenal and Chelsea’s bids get close to Leeds’ asking price.